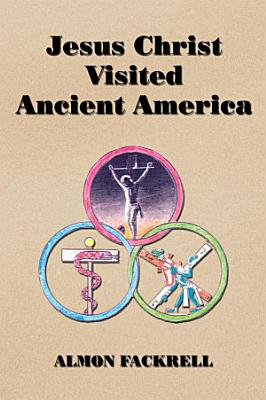 Jesus Christ Visited Ancient America By Almon Fackrell ". . . And other sheep I have, which are not of this fold: them also I must bring, and they shall hear my voice . . ." (John 10:14-16) The Bible, being the most revered book of the Christians, along with the collected treasures of Mayan and Aztec antiquities, testifies: Jesus Christ Visited Ancient America. Being an enthusiast of Bible versions, and after visiting the Aztec and Mayan ruins in Mexico, Almon Fackrell was prompted to have this study and reveal the parallels of Christian belief and Ancient America's religion. With it, Almon Fackrell was able to account for 276 similarities, which prove that Israelites were in Ancient America! Discover for yourself the facts that have been written both in the Bible and the Popol Vuh. About the Author Almon Fackrell was born in Pingree, Idaho and raised in Arimo, Idaho. In 1953, he was drafted into the U.S. Army and was assigned to a Special Weapons Detachment in New Mexico at Sandia Base, Holloman Air Force Base and White Sands Proving Grounds. He attended the University of New Mexico and graduated at Sandia Corporation Engineering Trade School in Albuquerque. After thirty-seven years of drafting, designing, and engineering in the Aerospace Industry, he retired as a senior support engineer from Parker Hannifin Corporation in Irvine, California.

Jesus Christ Visited Ancient America By Almon Fackrell ". . . And other sheep I have, which are not of this fold: them also I must bring, and they shall hear my

Lent and Holy Week in Rome

The Doctrine of the Spirit-filled Church

The Lord Jesus Christ declared . . . I will build My church: and the gates of hell shall not prevail against it. (Matthew 16:18). Throughout the past two thousa

Jay Winder is back in the conclusion of the Invasion Trilogy. He and Mandi have taken in a small child and now must fight to protect her and save the world from

Hiker and the Stranger

Boaz Hiker—called Bo by his friends—enjoys the trappings of success: a large home in suburban Pennsylvania, a beautiful wife and daughter, and a job control

Thomas Cartwright was the leader of the Elizabethan Puritans and his intellectual pre-eminence was widely acknowledged. Standard-bearer of the Prebytero-Puritan