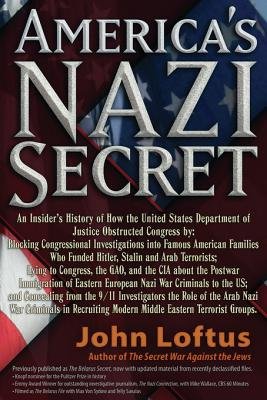 Fully revised and expanded, this stirring account reveals how the U.S. government permitted the illegal entry of Nazis into North America in the years following World War II. This extraordinary investigation exposes the secret section of the State Department that began, starting in 1948 and unbeknownst to Congress and the public until recently, to hire members of the puppet wartime government of Byelorussia—a region of the Soviet Union occupied by Nazi Germany. A former Justice Department investigator uncovered this stunning story in the files of several government agencies, and it is now available with a chapter previously banned from release by authorities and a foreword and afterword with recently declassified materials.

Fully revised and expanded, this stirring account reveals how the U.S. government permitted the illegal entry of Nazis into North America in the years following

"An updated, declassified and uncensored version of the original work, The Belarus secret."

The “remarkable” story of America's secret post-WWII science programs (The Boston Globe), from the New York Times bestselling author of Area 51. In the chao

The Nazis Next Door

"The shocking story of how America became one of the world's safest postwar havens for Nazis. Until recently, historians believed America gave asylum only to ke

A searing account of a dark “chapter in U.S. Cold War history . . . to help the anti-Soviet aims of American intelligence and national security agencies” (L

A gripping tale of the little-known Nazi plot to attack on American soil, and the brave individuals who got in the way.

"In Nazi Saboteurs, Samantha Seiple brings readers into the high-stakes world of Hitler's most trusted team of saboteurs as the eight men are hand-selected by t