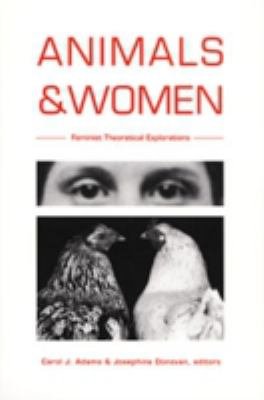 Animals and Women is a collection of pioneering essays that explores the theoretical connections between feminism and animal defense. Offering a feminist perspective on the status of animals, this unique volume argues persuasively that both the social construction and oppressions of women are inextricably connected to the ways in which we comprehend and abuse other species. Furthermore, it demonstrates that such a focus does not distract from the struggle for women’s rights, but rather contributes to it. This wide-ranging multidisciplinary anthology presents original material from scholars in a variety of fields, as well as a rare, early article by Virginia Woolf. Exploring the leading edge of the species/gender boundary, it addresses such issues as the relationship between abortion rights and animal rights, the connection between woman-battering and animal abuse, and the speciesist basis for much sexist language. Also considered are the ways in which animals have been regarded by science, literature, and the environmentalist movement. A striking meditation on women and wolves is presented, as is an examination of sexual harassment and the taxonomy of hunters and hunting. Finally, this compelling collection suggests that the subordination and degradation of women is a prototype for other forms of abuse, and that to deny this connection is to participate in the continued mistreatment of animals and women.

Animals and Women is a collection of pioneering essays that explores the theoretical connections between feminism and animal defense. Offering a feminist perspe

Women and the Animal Rights Movement

Animal rights is one of the fastest growing social movements today. Women greatly outnumber men as activists, yet surprisingly, little has been written about th

Defiant Daughters: 21 Women on Art, Activism, Animals, and The Sexual Politics of Meat

"Thought-provoking.... A lovely testament to horses and women from all walks of life."—Karen Stone, Chicago Tribune In a phenomenon too prevalent to be mere c

Stories of the First World War

Women Over 50 and Companion Animals

Marriage and Sexuality in Medieval and Early Modern Iberia

First published in 2002. This fascinating collection of essays examines the politics of gender and desire in premodern Iberia. Eukene Lacarra Lanz brings togeth

Humans and Animals: A Geography of Coexistence

An engaging and at times sobering look at the coexistence of humans and animals in the 21st century and how their sometimes disparate needs affect environments,