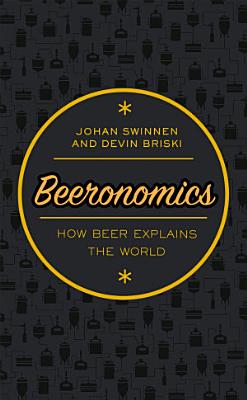 From prompting a transition from hunter-gatherer, to an agrarian lifestyle in ancient Mesopotamia, to bankrolling Britain's imperialist conquests, strategic taxation and the regulation of beer has played a pivotal role throughout history. Beeronomics: How Beer Explains the World tells these stories, and many others, whilst also exploring the key innovations that propelled the industrialization and consolidation of the beer market. At the same time when mega-mergers in the brewing industry are creating huge transnationals selling their beer across the globe, the craft beer movement in America and Europe has brought the rich history of ancient brewing techniques to the forefront in recent years. But less talked about is the economic influence of this beverage on the world and the myriad ways it has shaped the course of history. Beeronomics covers world history through the lens of beer, exploring the common role that beer taxation has played throughout and providing context for recognizable brands and consumer trends and tastes. Beeronomics examines key developments that have moved the brewing industry forward. Its most ubiquitous ingredient, hops, was used by the Hanseatic League to establish the export dominance of Hamburg and Bremen in the sixteenth century. During the late nineteenth century, bottom-fermentation led to the spread of industrial lager beer. Industrial innovations in bottling, refrigeration, and TV advertising paved the way for the consolidation and market dominance of major macrobreweries like Anheuser Busch in America and Artois Brewery in Belgium during the twentieth century. We're now in the era of global integration -- one multinational AB InBev, claims 46% of all beer profits -- but there's a counterrevolution afoot of small, independent craft breweries in America, Belgium and around the world. Beeronomics surveys these trends, giving context to why you see which brands and styles on shelves at your local supermarket or on tap at the nearby pub.

From prompting a transition from hunter-gatherer, to an agrarian lifestyle in ancient Mesopotamia, to bankrolling Britain's imperialist conquests, strategic tax

The Economics of Beer

Beer has been consumed across the globe for centuries and was the drink of choice in many ancient societies. Today it is the most important alcoholic drink worl

New Developments in the Brewing Industry

Institutions and ownership play a central role in the transformation and development of the beer market and brewing industry. Institutions set the external envi

The next great ingredient in the craft cocktail revolution has arrived: craft beer. Bartender and cocktail consultant Jacob Grier offers up more than fifty thir

This book investigates the birth and evolution of craft breweries around the world. Microbrewery, brewpub, artisanal brewery, henceforth craft brewery, are term

The Geography of Beer

This book builds on the highly successful Geography of Beer: Regions, Environment, and Society (2014) and investigates the geography of beer from two expanded p

The production of beer today occurs within a bifurcated industrial structure. There exists a small number of large, global conglomerates supplying huge volumes

The History of the Beer and Brewing Industry

Beer is widely defined as the result of the brewing process which has been refined and improved over centuries. Beer is the drink of the masses – it is bought

Researching Craft Beer offers insights for aspiring and present owners of breweries, those looking to open a craft beer bar as well as other beer researchers. T

In Praise of Beer

In Praise of Beer is a helpful guide for beer lovers looking to learn more about what they should look for with each sip of beer. In his latest book, Charles Ba