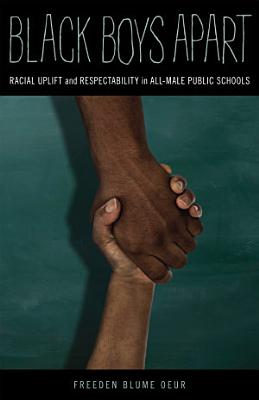 How neoliberalism and the politics of respectability are transforming African American manhood While single-sex public schools face much criticism, many Black communities see in them a great promise: that they can remedy a crisis for their young men. Black Boys Apart reveals triumphs, hope, and heartbreak at two all-male schools, a public high school and a charter high school, drawing on Freeden Blume Oeur’s ethnographic work. We meet young men who felt their schools empowered and emasculated them, parents who were frustrated with co-ed schools, teachers who helped pave the road to college, and administrators who saw in Black male academies the advantages of privatizing education. While the two schools have distinctive histories and ultimately charted different paths, they were both shaped by the convergence of neoliberal ideologies and a politics of Black respectability. As Blume Oeur reveals, all-boys education is less a school reform initiative and instead joins a legacy of efforts to reform Black manhood during periods of stark racial inequality. Black male academies join long-standing attempts to achieve racial uplift in Black communities, but in ways that elevate exceptional young men and aggravate divisions within those communities. Black Boys Apart shows all-boys schools to be an odd mix of democratic empowerment and market imperatives, racial segregation and intentional sex separation, strict discipline and loving care. Challenging narratives that endorse these schools for nurturing individual resilience in young Black men, this perceptive and penetrating ethnography argues for a holistic approach in which Black communities and their allies promote a collective resilience.

How neoliberalism and the politics of respectability are transforming African American manhood While single-sex public schools face much criticism, many Black c

Go to School, You're a Little Black Boy

Among the important stories that need to be told about noteworthy Canadians, Lincoln Alexander’s sits at the top of the list. Born in Toronto in 1922, the son

The Black Church Studies Reader addresses the depth and breadth of Black theological studies, from Biblical studies and ethics to homiletics and pastoral care.

This collection of twelve essays discusses the principles and practices of women's autobiographical writing in America, England, and France from the eighteenth

Flood A romance of Our Time