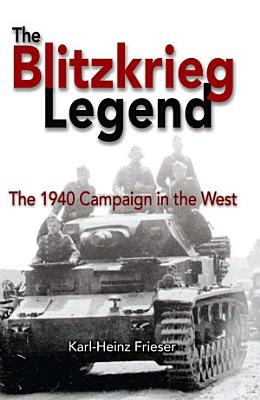 Here, for the first time in English, is an illuminating German perspective on the decisive blitzkrieg campaign. The account, written by the German historian Karl-Heinz Frieser and edited by American historian John T. Greenwood, provides the definitive explanation for Germany’s startling success and the equally surprising military collapse of France and Britain on the European continent in 1940. In a little over a month, Germany defeated the Allies in battle, a task that had not been achieved in four years of brutal fighting during World War I. First published in 1995 as the official German history of the 1940 campaign, this book goes beyond standard explanations to show that the German victory was not inevitable and that French defeat was not preordained. Contrary to most accounts of the campaign, Frieser’s illustrates that the military systems of both Germany and France were solid and that their campaign plans were sound. The key to victory or defeat, Frieser argues, was the execution of operational plans—both preplanned and ad hoc—amid the eternal Clausewitzian combat factors of friction and the fog of war. He shows why, on the eve of the campaign, the British and French leaders had good cause to be confident and why many German generals were understandably concerned that disaster was looming for them. This study explodes many of the myths concerning German blitzkrieg warfare and the planning for the 1940 campaign. Frieser’s groundbreaking interpretation of the topic has been the subject of discussion since the German edition first appeared. This English translation is published in cooperation with the Association of the United States Army.