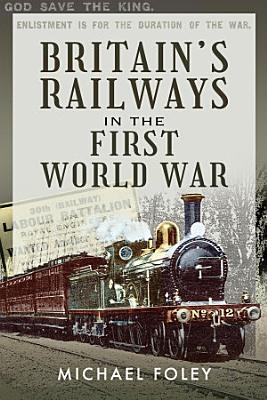 It is easy to believe that the only part that Britain’s railways played in the First World War was to carry the soldiers to the ships that would take them to France. This couldn’t be further from the truth. Without the help from the railways it is unlikely that the war would have been over as quickly as it was. In Britain’s Railways in the First World War Michael Foley examines how the railway system and its workers proved to be a vital part of the war effort, one contemporary writer even commenting that he thought they were as significant as the navy. The book describes how the enlistment of railway troops for the Royal Engineers to meet the increasing transport demands of the military was to bleed the civilian system dry as skilled railwaymen were sent to work at the front. In addition, the military commandeered thousands of Britain’s railway vehicles, sending them to each of the theatres of war, and turned the already stressed railway workshops away from maintaining what remained of the country’s railways and rolling stock so they could produce armaments for the forces instead. The book also reveals how the British were so far behind their enemies and allies in the use of railway support to the front lines that they had to plead for help from Canada.

The outbreak of the Second World War had an enormous effect on the railway system in Britain. Keeping the trains running through times of conflict was not such

Railways of the Great War with Michael Portillo

From the exploits of railwaymen at the Front to the secrets of railway spies who worked behind enemy lines; the manufacture of munitions in railway workshops to

The North Eastern Railway in the First World War

The North Eastern Railway in the First World War, like all of the British Railways, underwent many changes, and not just from the inevitable loss of male staff

Narrow Gauge in the Somme Sector

The Somme sector of the Western Front was held by French forces until early 1916, when the British and Dominions Third and Fourth Armies moved into the northern

Alexander Mullay tells the story of Britain's Railways during the First World War. From troop and hospital trains to carrying munitions and freight, the railway

British Railways and the Great War