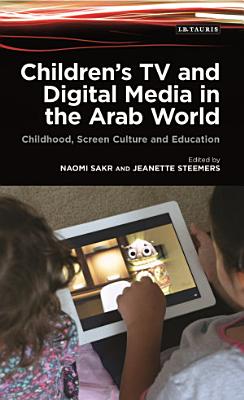 Who analyses children's screen content and media use in Arab countries, and with what results? Children, defined internationally as under-18s, account for some 40 per cent of Arab populations and the proportion of under-fives is correspondingly large. Yet studies of children's media and child audiences in the region are as scarce as truly popular locally produced media content aimed at children. At the very time when conflict and uncertainty in key Arab countries have made local development and diversification of children's media more remote, it has become more urgent to gain a better understanding of how the next generation's identities and worldviews are formed. This interdisciplinary book is the first in English to probe both the state of Arab screen media for children and the practices of Arabic-speaking children in producing, as well as consuming, screen content. It responds to the gap in research by bringing together a holistic investigation of institutions and leading players, children's media experiences and some iconic media texts.With children's media increasingly linked to merchandising, which favours US-based global players and globalizing forces, this volume provides a timely insight into tensions between differing concepts of childhood and desirable media messages.

Children's TV and Digital Media in the Arab World

Who analyses children's screen content and media use in Arab countries, and with what results? Children, defined internationally as under-18s, account for some

"This book examines the current state of global media distribution today, including legacy and born-digital media industries, and the social, cultural, and econ

Arab Worlds Beyond the Middle East and North Africa

By providing migration experiences of Arabs to various nation-states, this volume examines socio-historical factors that allowed Arab communities to settle in s

Using a phenomenological and multi-sited ethnographic approach, this book focuses on children’s uses of digital media in three sites—London, Casablanca and

Culture, Time and Publics in the Arab World

In this revealing new study, Tarik Sabry and Joe Khalil preside over an original new exploration of Arab culture. They employ subjects as varied as anthropology

This volume explores how television has been a significant conduit for the public consumption of changing ideas about children, childhood, and national identity

What happened when Sesame Street and Big Brother were adapted for African audiences? Or when video games Final Fantasy and Assassins’ Creed were localized for

The Routledge International Handbook of Children, Adolescents, and Media

This second, thoroughly updated edition of The Routledge International Handbook of Children, Adolescents, and Media analyzes a broad range of complementary area