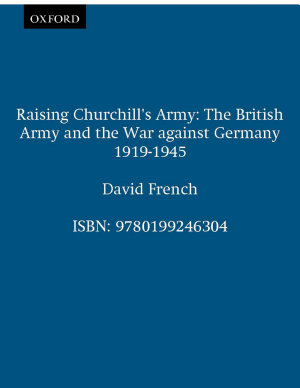 This is the first serious analysis of the combat capability of the British army in the Second World War. It sweeps away the myth that the army suffered from poor morale, and that it only won its battles thorugh the use of 'brute force' and by reverting to the techniques of the First World War. David French analyses the place of the army in British strategy in the interwar period and during the Second World War. He shows that after 1918 the General Staff tried hard to learn the lessons of the First World War, enthusiastically embracing technology as the best way of minimizing future casualties. In the first half of the Second World War the army did suffer from manifold weaknesses, not just in the form of shortages of equipment, but also in the way in which it applied its doctrine. Few soldiers were actively eager to close with the enemy, but the morale of the army never collapsed and its combat capability steadily improved from 1942 onwards. Professor French assesses Montgomery's contributions to the war effort and concludes that most important were his willingness to impose a uniform understanding of doctrine on his subordinates, and to use mechanized firepower in ways quite different from Haig in the First World War.

This is the first serious analysis of the combat capability of the British army in the Second World War. It sweeps away the myth that the army suffered from poo

The Special Operations Executive was one of the most secretive organizations of the Second World War, its activities cloaked in mystery and intrigue. The fate,

As a young man Winston Churchill set out to become a hero, to make a name for himself in the public eye as a soldier and so make possible a life of politics and

By the spring of 1940, the phoney war suddenly became very real. In April Hitler's forces, invaded Norway and a month later began their assault on France and th

Why the British forces fought so badly in World War II and who was to blame Gordon Corrigan's Mud, Blood and Poppycock overturned the myths that surround the Fi

This book reveals entirely new dimensions of the origins of the cold war during the period 1943-1947. As smith demonstrates, one of the primary causes of the co