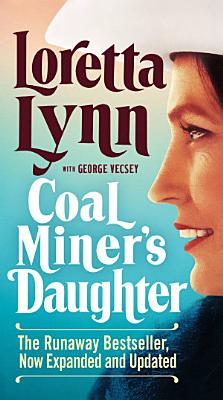 New York Times bestselling author and Nashville legend Loretta Lynn tells the story of her rise from deep poverty in Butcher Holler, Kentucky, to the top of the male-dominated country music industry. Reissued for the 40th Anniversary of the Oscar-winning, Sissy Spacek-starring film of the same name, Coal Miner's Daughter recounts Loretta Lynn's astonishing journey to become one of the original queens of country music. Loretta grew up dirt poor in the mountains of Kentucky, she was married at thirteen years old, and became a mother soon after. At the age of twenty-four, her husband, Doo, gave her a guitar as an anniversary present. Soon, she began penning songs and singing in front of honky-tonk audiences, and, through years of hard work, talent, and true grit, eventually made her way to Nashville, the Grand Ole Opry, eventually securing her place in country music history. Loretta's prolific and influential songwriting made her the first woman to receive a gold record in country music, and got her named the first female Entertainer of the Year by the Country Music Association. This riveting memoir introduces readers to all the highs and lows on her road to success and the tough, smart, funny, and fascinating woman behind the legend.

New York Times bestselling author and Nashville legend Loretta Lynn tells the story of her rise from deep poverty in Butcher Holler, Kentucky, to the top of the

Loretta Lynn’s classic memoir tells the story of her early life in Butcher Holler, Kentucky, and her amazing rise to the top of the music industry. Born into

A wealthy landlord’s son, and a coal miner’s daughter... Growing up in poverty, one of six siblings, Hannah Armstrong never thought she’d know anything ot

Set during 60s and 70s in the coalfields of Bihar and Bengal, ‘The Coal Miner’s Daughter’ tells the fascinating story of life in the coal mines through th

Son of a Coal Miner's Daughter

William Bill Spencer Miller takes us on his journey of expansion and personal growth through his varied experiences as a farm boy in Brown County, Indiana to a

Ancestry of a Coal Miner's Daughter