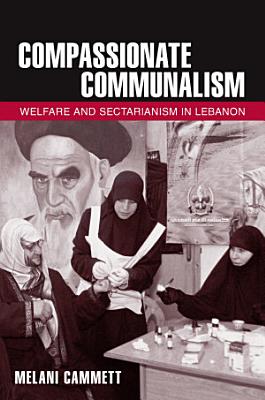 In Lebanon, religious parties such as Hezbollah play a critical role in providing health care, food, poverty relief, and other social welfare services alongside or in the absence of government efforts. Some parties distribute goods and services broadly, even to members of other parties or other faiths, while others allocate services more narrowly to their own base. In Compassionate Communalism, Melani Cammett analyzes the political logics of sectarianism through the lens of social welfare. On the basis of years of research into the varying welfare distribution strategies of Christian, Shia Muslim, and Sunni Muslim political parties in Lebanon, Cammett shows how and why sectarian groups deploy welfare benefits for such varied goals as attracting marginal voters, solidifying intraconfessional support, mobilizing mass support, and supporting militia fighters. Cammett then extends her arguments with novel evidence from the Sadrist movement in post-Saddam Iraq and the Bharatiya Janata Party in contemporary India, other places where religious and ethnic organizations provide welfare as part of their efforts to build political support. Nonstate welfare performs a critical function in the absence of capable state institutions, Cammett finds, but it comes at a price: creating or deepening social divisions, sustaining rival visions of the polity, or introducing new levels of social inequality. Compassionate Communalism is informed by Cammett’s use of many methods of data collection and analysis, including Geographic Information Systems (GIS) analysis of the location of hospitals and of religious communities; a large national survey of Lebanese citizens regarding access to social welfare; standardized open-ended interviews with representatives from political parties, religious charities, NGOs, and government ministries, as well as local academics and journalists; large-scale proxy interviewing of welfare beneficiaries conducted by trained Lebanese graduate students matched with coreligionist respondents; archival research; and field visits to schools, hospitals, clinics, and other social assistance programs as well as political party offices throughout the country.

In Lebanon, religious parties such as Hezbollah play a critical role in providing health care, food, poverty relief, and other social welfare services alongside

On the basis of years of research into the varying welfare distribution strategies of Christian, Shia Muslim, and Sunni Muslim political parties in Lebanon, Cam

Lebanon seems a country in the grip of permanent crisis. In recent years it has suffered blow after blow, from Rafiq Hariri's assassination in 2005, to the 2006

This report examines the role of incentives, trust, and engagement as critical determinants of service delivery performance in MENA countries. Focusing on educa

The Political Science of the Middle East

A definitive overview of what political scientists are working on within the Middle East and North Africa. The Arab Uprisings of 2011-12 catalyzed a new wave of

Chronicles secularism in Lebanon up to the present day, presenting possible causes for its decline in the face of sectarianism.

The first full-length study to examine the significance of the critical but neglected Iranian organization and ministry, Reconstruction Jihad.

This book explores pedagogy appropriate for the secondary school technology education classroom. It covers the dimensions of pedagogy for technology with schola

"Introduces and explains the economics behind the multi-billion dollar humanitarian marketplace and how it came about ... Tackles difficult and concrete issues