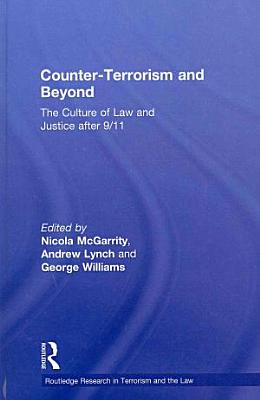 This book considers the increasing trend towards a âe~culture of controlâe(tm) in democratic countries. The post-9/11 counter-terrorism laws in nations such as the USA, the UK, Canada and Australia provide a stark demonstration of this trend. These laws share a focus on the pre-emption of crime, restrictions on the right to liberty of non-suspects, limited public access to information, and increased community surveillance. The laws derogate, in many respects, from the ordinary principles of the criminal justice system and fundamental human rights while also harnessing public institutions in the broader project of prevention and control. Distinctively, the contributors to this volume focus on the impact of these laws outside of the counter-terrorism context. The book draws together a range of experts in both public and criminal law, from Australia and overseas, to examine the effect of counter-terrorism laws on public institutions within democracies more broadly. Issues considered include changes to the role and functions of the courts, the expansion of executive discretion, the seepage of extraordinary powers and pre-emptive measures into other areas of the criminal law, and the interaction and overlap between intelligence and law enforcement agencies. Counter-Terrorism and Beyond: The Culture of Law and Justice After 9/11 will be of interest to students and scholars of criminal law, criminology, comparative criminal justice, terrorism and national security, public law, human rights, governance and public policy.

This book considers the increasing trend towards a âe~culture of controlâe(tm) in democratic countries. The post-9/11 counter-terrorism laws in nations such a

Terrorism has emerged as one of the most problematic issues facing national governments and the international community in the 21st century. But how is it possi

The 9/11 attacks revealed that the transnational terrorist threat facing the US and its partners was far more dangerous than most had previously discerned. It w

This book considers the increasing trend towards a ‘culture of control’ in democratic countries. The post-9/11 counter-terrorism laws in nations such as the

Toward a Phenomenology of Terrorism

This book examines the socio-psychological dynamics and drivers of terrorism from a humanistic perspective. Most interpret terrorism as meaningless, asocial vio

The terrorist attacks of September 11th and more recent atrocities in Russia, Indonesia and Kenya have demonstrated that terrorism now poses the most dangerous

The Proscription of Terrorist Organisations

Powers to outlaw or proscribe terrorist organisations have become cornerstones of global counter-terrorism regimes. In this comprehensive volume, an internation

Counter-terrorism, Constitutionalism and Miscarriages of Justice

Economics of Terrorism and Counter-Terrorism Measures

This textbook presents a systematic study of terrorism from the standpoint of economic analysis. Choosing the kind and level of measures to counter terror is, t

Insurgencies are like the hydra, the many-headed beast of Greek mythology. Once one begins, the measures a government takes to eliminate militantsùto cut off t