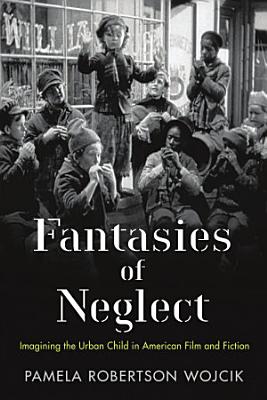 In our current era of helicopter parenting and stranger danger, an unaccompanied child wandering through the city might commonly be viewed as a victim of abuse and neglect. However, from the early twentieth century to the present day, countless books and films have portrayed the solitary exploration of urban spaces as a source of empowerment and delight for children. Fantasies of Neglect explains how this trope of the self-sufficient, mobile urban child originated and considers why it persists, even as it goes against the grain of social reality. Drawing from a wide range of films, children’s books, adult novels, and sociological texts, Pamela Robertson Wojcik investigates how cities have simultaneously been demonized as dangerous spaces unfit for children and romanticized as wondrous playgrounds that foster a kid’s independence and imagination. Charting the development of free-range urban child characters from Little Orphan Annie to Harriet the Spy to Hugo Cabret, and from Shirley Temple to the Dead End Kids, she considers the ongoing dialogue between these fictional representations and shifting discourses on the freedom and neglect of children. While tracking the general concerns Americans have expressed regarding the abstract figure of the child, the book also examines the varied attitudes toward specific types of urban children—girls and boys, blacks and whites, rich kids and poor ones, loners and neighborhood gangs. Through this diverse selection of sources, Fantasies of Neglect presents a nuanced chronicle of how notions of American urbanism and American childhood have grown up together.

In our current era of helicopter parenting and stranger danger, an unaccompanied child wandering through the city might commonly be viewed as a victim of abuse

In our current era of helicopter parenting and stranger danger, an unaccompanied child wandering through the city might commonly be viewed as a victim of abuse

Scandal and Survival in Nineteenth-Century Scotland

"Her Scottish father put her in an institution in Calcutta when she was small. Guilt made her Highland gentry grandfather send for her, but he considered her an

During the 1920s and 1930s, Edward Steichen was the most successful photographer in the advertising industry. His commercial work appeared regularly in VANITY F

Daydreams and the Function of Fantasy

The Fantasy Literature of England

In this, the first book on English fantasy, Colin Manlove shows that for all its immense diversity, English fantasy can best be understood in terms of its stron

This widely used guidebook and text combines theory, research, and practical clinical strategies. Provided is a thoughtful framework for understanding the devel

This book describes the individual's internal struggle for and against personality change, and the dynamic processes the foster or impede such change. Also inve