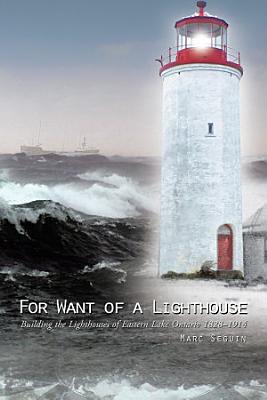 No safe harbours for steamboats or sailing vessels could be found along an isolated 70-mile stretch of eastern Lake Ontario, dominated by the irregular-shaped Prince Edward County peninsula. Frequent storms, rocky reefs and sandy shoals were among the many dangers facing 19th century mariners. So many shipwrecks mark one narrow and shallow underwater ridge in the region that it became known as the graveyard of Lake Ontario. It was on these shores, from Presquile Bay to Kingston harbour and along the Bay of Quinte, that a network of more than forty lighthouses and light towers was built between 1828 and 1914. FOR WANT OF A LIGHTHOUSE presents a sweeping look at the social and technological changes which marked the era, and brings to life the people, politics and hardships involved in the construction of these essential aids to navigation. Through the use of extensive archival material and more than 100 maps and photographs, Marc Seguin documents the vital role these lighthouses played in the building of a nation. There is now a race against time to save the few original towers that are still standing. All profits from the sale of this book will be used to preserve these remaining lighthouses.

For Want of a Lighthouse

No safe harbours for steamboats or sailing vessels could be found along an isolated 70-mile stretch of eastern Lake Ontario, dominated by the irregular-shaped P

Trapped in the Tower

Journal of the Franklin Institute

This work has been selected by scholars as being culturally important, and is part of the knowledge base of civilization as we know it. This work was reproduced

Shipping World and Herald of Commerce

Form as Compensation for Life