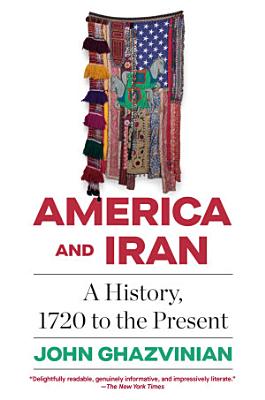 A NEW YORK TIMES NOTABLE BOOK OF THE YEAR • A hugely ambitious, “delightfully readable, genuinely informative” portrait (The New York Times) of the two-centuries-long entwined histories of Iran and America—two powers who were once allies and now adversaries—by an admired historian and former journalist. In this rich, fascinating history, John Ghazvinian traces the complex story of the relations between these two nations back to the Persian Empire of the eighteenth century—the subject of great admiration by Thomas Jefferson and John Quincy Adams—and an America seen by Iranians as an ideal to emulate for their own government. Drawing on years of archival research both in the United States and Iran—including access to Iranian government archives rarely available to Western scholars—the Iranian-born, Oxford-educated historian leads us through the four seasons of U.S.–Iran relations: the spring of mutual fascination; the summer of early interactions; the autumn of close strategic ties; and the long, dark winter of mutual hatred. Ghazvinian makes clear where, how, and when it all went wrong. America and Iran shows why two countries that once had such heartfelt admiration for each other became such committed enemies—and why it didn’t have to turn out this way.

In his highly influential book The Threatening Storm, bestselling author Kenneth Pollack both informed and defined the national debate about Iraq. Now, in The P

My Life, from Iran to America

This book is about the determined story of Angelina and her family and the hardships they faced while leaving Iran and reaching freedom in the United States. Gr

To See and See Again

The daughter of an Iranian father and an American mother describes growing up in two countries.

NEW YORK TIMES BESTSELLER • Finalist for the PEN/USA Award in Creative Nonfiction, the Thurber Prize for American Humor, and the Audie Award in Biography/Memo

How Iran Plans to Fight America and Dominate the Middle East

With the creeping possibility of a nuclear breakout, its vigorous sponsorship of international non-state armed groups and its escalating intervention next door

As far back as she can remember, Azadeh Moaveni has felt at odds with her tangled identity as an Iranian-American. In suburban America, Azadeh lived in two worl

Critically examines the fifty-year American-Iranian relationship with the hindsight of Iran's recent revolution, detailing how the good intentions of both Ameri