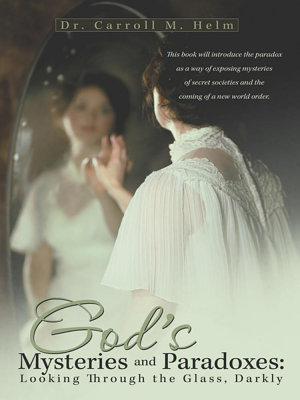 God’s Mysteries and Paradoxes: Looking through the Glass Darkly is a book about paradoxes and how they were actually created by God to bring unique enlightenment but also to confound the so-called earthly wisdom. Paradoxes also keep believers humble by showing them that God’s ways are not always man’s ways. “For this is what the high and lofty One says—he who lives forever, whose name is holy; I live in a high and holy place but also with him who is contrite and lowly in spirit, to revive the spirit of the lowly and to revive the heart of the contrite (Isaiah 57: 15).” This book introduces the reader to the ancient idea of “The Divine Paradox” written by Hermes Tristmegistus (thrice great) in The Divine Pylander. An additional book, Corpus Hermeticum, was translated by Marsilo Ficino during the early Renaissance and helps frame the philosophical paradox of nature versus faith. This book, along with other fragments written by Hermes Trismegistus, was translated in the early 1400s and caused a rebirth of its teachings during the Renaissance. Modern secret societies and the occult are using much of the same knowledge to deceive people in the world today. Evidence shows Albertus Magnus, Roger Bacon, and the Knights Templar possessed ancient knowledge and from it gave rise to secret organizations and societies operating today, including the Illuminati, Freemasons, and modern occultists.

God’s Mysteries and Paradoxes: Looking Through the Glass, Darkly

God’s Mysteries and Paradoxes: Looking through the Glass Darkly is a book about paradoxes and how they were actually created by God to bring unique enlightenm

The world is so wonderfully designed. Only by blatant dishonesty can anyone doubt there must be a designer:- God. There is nothing manufactured without purpose.

In a world filled with ambiguity, we want faith to act like an orderly set of truth-claims to solve the problems that life throws at us. While there are certain

The Life of faith, with which is incorporated 'The Christian's pathway of power'.

Thoughts on Religion and Philosophy