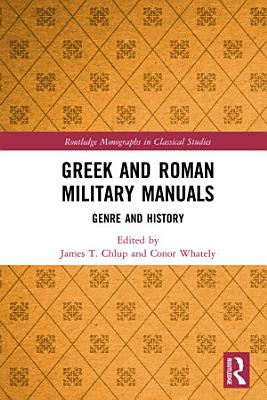 This volume explores the enigmatic primary source known as the ancient military manual. In particular, the volume explores the extent to which these diverse texts constitute a genre (sometimes unsatisfactorily classified as ‘technical literature’), and the degree to which they reflect the practice of warfare. With contributions from a diverse group of scholars, the chapters examine military manuals from early Archaic Greece to the Byzantine period, covering a wide range of topics including readership, siege warfare, mercenaries, defeat, textual history, and religion. Coverage includes most of the major contemporary siege manual writers, including Xenophon, Frontinus, Vegetius, and Maurice. Close examination of these texts serves to reveals the complex ways in which ancient Greeks, Romans, and Byzantines sought to understand better, and impose order upon, the seemingly irrational phenomenon known as war. Providing insight into the multifaceted collection of texts that constituted military manuals, this volume is a key resource for students and scholars of warfare and military literature in the classical and Byzantine periods.

Please note that the content of this book primarily consists of articles available from Wikipedia or other free sources online. Commentary (books not included).

The Sylloge Tacticorum is a mid-Byzantine example of the literary genre of military manuals or Taktika which stretches back to antiquity. It was one of a number

Brill's Companion to Greek Land Warfare Beyond the Phalanx

A Sensory History of Ancient Warfare

How can we attempt to understand the experience of those involved in ancient battles, sieges and campaigns? What was the visual impact of seeing the massed rank

This book studies the Sylloge Tacticorum, an important tenth-century Byzantine military manual. The text is used as a case study to connect military manuals wit

Piracy, Pillage, and Plunder in Antiquity

Piracy, Pillage, and Plunder in Antiquity explores appropriation in its broadest terns in the ancient world, from brigands, mercenaries and state-sponsored "pir

Literature and Culture in the Roman Empire, 96–235

Discovers new connections and cross-fertilisations between different cultural, linguistic and religious communities in the Roman Empire.