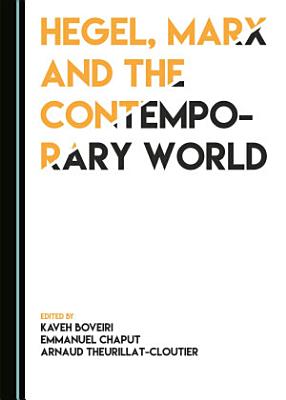 This book is the result of a three-day conference held in April 2014 at the University of Montreal, Canada, discussing the relevance of the work of Hegel and Marx in today’s world, particularly with regard to the ecological, economic, political and anthropological crisis facing humanity. Accordingly, the book an exploration of the specific nature of the crisis we face both in our everyday lives and in the realm of theory. However, if indeed the necessity of a proper critique (Kritikos) is intimately linked to a state of crisis (Krisis), the conceptual frame necessary to produce such a critique may itself be in crisis. Among the vast number of critical oppositions to contemporary capitalism, what are the keys available to understand the present forms of human conditions, alienation and exploitation? Controversies and divisions among the different tendencies within the critical tradition tend to highlight the point that there is also a theoretical crisis, which prevents a proper diagnosis of the actual crisis, and prevents, in turn, a proper plan of action from being established. Looking back to Marx and Hegel allowed a return, if not to the sources, at least to two unavoidable influences among the various critical approaches to capitalism. Be it with or against Hegel and/or Marx, the criticisms of modernity, post-modernity and capitalism cannot neglect the shadows of these thinkers. Both Marx’s and Hegel’s philosophical, sociological and political enterprises must be linked historically to the will to diagnose and solve what they saw as the most important crises of their own time, from, in Hegel’s case, the spiritual crisis which followed the advent of modernity and its accompanying turmoil, to the social and political crisis caused by capitalism and the advent of a new industrial society, in Marx’s case. Both intellectual ventures are at every turn haunted by the notion of crisis. This book will appeal to anyone interested in Hegel’s and Marx’s philosophical and political theories. Not only does it provide the historical context necessary to understand properly the relation between Marx and Hegel, but it also places the relevance of their teachings for the contemporary reader in perspective.

Hegel, Marx and the Contemporary World

This book is the result of a three-day conference held in April 2014 at the University of Montreal, Canada, discussing the relevance of the work of Hegel and Ma

From Marx to Hegel and Back

The relation between Hegel and Marx is among the most interpreted in the history of philosophy. Given the contemporary renaissance of Marx and Marxist theories,

From Marx to Hegel and Back

The relation between Hegel and Marx is among the most interpreted in the history of philosophy. Given the contemporary renaissance of Marx and Marxist theories,

A History of Modern Political Thought

Global Theory from Kant to Hardt and Negri

Marx’s Grundrisse is acknowledged as the vital link between Marx’s early and late work. It is also a crucial text in elucidating Marx’s debt to the ideali

An exposition and critique of the views of Marx and Marxists in which Marx's views are compared with other views and are explored in terms of theories, causes,

Christianity and Confucianism: Culture, Faith and Politics, sets comparative textual analysis against the backcloth of 2000 years of cultural, political, and re

Although Marx’s concept of ideology has been a subject of considerable discussion, much of the debate has proved to be rather disappointing. There has been no

This Handbook provides a comprehensive single-volume treatment of Fichte’s philosophy. In addition to offering new researchers an authoritative introduction a