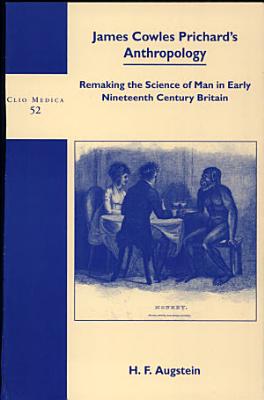 The Bristol doctor James Cowles Prichard (1786-1848) has enjoyed a glowing reputation. Late Victorians regarded him as the founder of British anthropology and, in the twentieth century, he has been considered as a precursor of Darwin. Nowadays his name is cited mainly in context of inquiries into the rise of racial theories. Prichard's own theoretical goal was simple: the son of Quaker parents, he attempted to establish that the Bible provided a correct account of the earliest history of humankind; above all it was his aim to prove once and for all the doctrine of monogenesis: the unitary origins of mankind. He single-handedly charted the waters of the pre-Victorian human sciences. Philology, anthropology, mythology, Biblical criticism, the philosophy of the human mind, comparative anatomy, physiology, and practical medicine - Prichard mastered subjects so diverse that his learning may be called truly universal. His views have often been misrepresented, however, and his opposition to racial thinking in particular has been underestimated. This book, the first study dedicated exclusively to Prichard, explores his notions of man's place in nature and puts them in the context of contemporary European learning.

The Bristol doctor James Cowles Prichard (1786-1848) has enjoyed a glowing reputation. Late Victorians regarded him as the founder of British anthropology and,

The Bristol doctor James Cowles Prichard (1786-1848) has enjoyed a glowing reputation. Late Victorians regarded him as the founder of British anthropology and,

Victorian anthropology has been called an 'armchair practice', distinct from the scientific discipline of the 20th century. Sera-Shriar argues that anthropology

Science, Sexuality, and Race in the United States and Australia, 1780–1940, Revised Edition

Science, Sexuality, and Race in the United States and Australia, 1780–1940, Revised Edition is a sociohistorical tour de force that examines the entwined form

Christ Across the Disciplines

After years of discussion within the field of anthropology concerning how to properly engage with theology, a growing number of anthropologists now want to enga

Materials of the Mind

Phrenology was the most popular mental science of the Victorian age. From American senators to Indian social reformers, this new mental science found supporters

Researches Into the Physical History of Man

Victorian Culture and the Origin of Disciplines

Current studies in disciplinarity range widely across philosophical and literary contexts, producing heated debate and entrenched divergences. Yet, despite thei