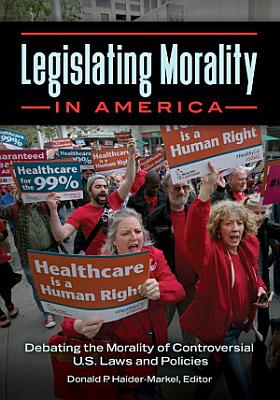 This title undertakes an impartial, authoritative, and in-depth examination of the moral arguments and ideas behind the laws and policies that govern personal, corporate, and government behavior in the United States. This A-Z encyclopedia surveys the moral arguments that provide the foundation for many of the most important and/or divisive laws, policies, and beliefs that govern modern American society. The work discusses such controversial and important issues as abortion, civil rights, drugs and alcohol, euthanasia, guns, hate crimes, immigration, immunization, natural resource use and protection, prostitution, same-sex marriage, and workplace laws. In the process of surveying historical and current beliefs about appropriate legislative responses to these issues, this work will help readers to understand how conservative and liberal conceptions of justice, fairness, and morality are at the center of so many hot-button political and social issues in 21st century America. The essays featured in the volume cover wide-ranging and controversial topics related to constitutional and religious freedoms, issues of crime and punishment, sexuality and reproduction, environmental protection and public health, national security and civil liberties, social welfare programs, and education. Context-setting overview essay introduces the question of whether (or to what degree) legislation inevitably carries a moral element and discusses examples of legislation in US history with a significant alleged "moral" grounding, ranging from the Emancipation Proclamation and Prohibition to anti-smoking laws, the Civil Rights Act, and the Affordable Care Act Each entry not only summarizes economic, legal, and sociological arguments for or against positions on these issues but more importantly focuses on the ethical/moral arguments championed by various sides A chronology of events situates morality historically as a force in US legislation An annotated bibliography suggests resources for further study, related to concepts of morality and their impact on American laws

Legislating Morality in America: Debating the Morality of Controversial U.S. Laws and Policies

This title undertakes an impartial, authoritative, and in-depth examination of the moral arguments and ideas behind the laws and policies that govern personal,

The SAGE Guide to Key Issues in Mass Media Ethics and Law is an authoritative and rigorous two-volume, issues-based reference set that surveys varied views on m

Africa and the Decolonisation of State-Religion Policies

The book offers a critical account of the practice of state-secularism in Kenya, Nigeria and Uganda in comparison to France, Turkey and the US.

A timely unsettling of old "settled" questions surrounding divorce Amid the current nationwide debate over what "marriage" is, this book examines anew the natur

A Culture of Engagement

Religious traditions in the United States are characterized by ongoing tension between assimilation to the broader culture, as typified by mainline Protestant c

This book critiques the decision-making process in Article 53(a) of the European Patent Convention. To date, such decisions have been taken at high levels of ex