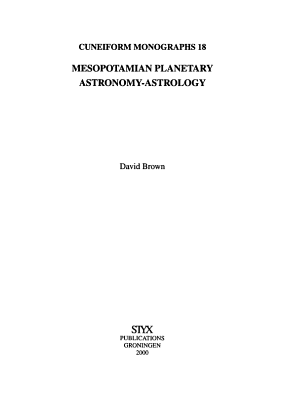 Pliny wrote of Babylon that "here the creator of the science of astronomy was". Excavations have shown this statement to be true. This book argues that the earliest attempts at the accurate prediction of celestial phenomena are indeed to be found in clay tablets dating to the 8th and 7th centuries BC from both Babylon and from Nineveh. The author carefully situates this astronomy within its cultural context, treating all available material from the relevant period, and also analysing the earlier astrological material and the later well-known ephemerides and related texts. A wholly new approach to cuneiform astral concerns emerges - one in which both celestial divination and the later astronomy are shown to be embedded in a prevailing philosophy dealing with the ideal nature of the early universe, and in which the dynamics of the celestial divination industry that surrounded the last Assyrian monarchs account for no less than the first recorded "scientific revolution". This work closely adheres to the original textual sources, and argues for the evolution on the basis of the needs of the ancient scholars and the internal logic of the divinatory and predictive systems employed. To this end, it offers, for the first time, a Mesopotamian contribution to the philosophy, and not only the history, of science.

Pliny wrote of Babylon that "here the creator of the science of astronomy was". Excavations have shown this statement to be true. This book argues that the earl

Zodiac Calendars in the Dead Sea Scrolls and Their Reception

In the modern West, we take for granted that what we call the “natural world” confronts us all and always has—but Before Nature explores that almost unima

In antiquity, the expertise of the Babylonians in matters of the heavens was legendary and the roots of both western astronomy and astrology are traceable in cu

The Babylonian World presents an extensive, up-to-date and lavishly illustrated history of the ancient state Babylonia and its 'holy city', Babylon. Historicize

English summary: These essays interpret Old Testament prophetic writings and their social criticism in the cultural context of ancient near Eastern prophecy. Ge

Ancient Near Eastern Thought and the Old Testament

Leading evangelical scholar John Walton surveys the cultural context of the ancient Near East, bringing insight to the interpretation of specific Old Testament

A reexamination of the people and movements associated with Qumran, their outlook on the world, and what bound them together Dead Sea Scrolls, Revise and Repeat

Astrology through History: Interpreting the Stars from Ancient Mesopotamia to the Present

Alphabetically arranged entries cover the history of astrology from ancient Mesopotamia to the 21st century. In addition to surveying the Western tradition, the