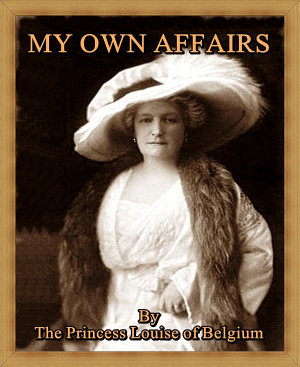 My Own Affairs As the eldest daughter of a great man and a great King, whose magnificent intelligence has enriched his people, I owe nothing but misfortune to my royal origin. Ever since I was born I have suffered and been deceived. I have idealized Life too much. In the evening of my days I do not wish to remain under the cloud of the false impression which is now prevalent concerning me. Without desiring to allude too much to the past, and to retrace the road of my Calvary, I should like at least to borrow a few pages from my memories and reflections, inspired by events which have destroyed thrones in whose proximity I once lived. The Emperor of Austria, the German Emperor, the Tsar of Bulgaria were all familiar figures to me. Driven to Munich by the War, then to Budapest, taken prisoner for a brief space by Hungarian Bolshevists, I have survived the European tempest, and I have seen all those who disowned and crushed me, beaten and punished. And I trembled every day for my poor Belgium, so strong in her courage and her travail, but so unjust to me—oh no, not the people—the good people are naturally heroic and indefatigable. I refer to certain of their leaders, who have been misled on my account, and who are also, perhaps, too fond of money. Unjust themselves, they all equally violated justice by illicit interests which had the appearance of legality, as well as by the false attitude which appeared merely to be forgetfulness, but which was actually ingratitude. My father has not yet had a monument erected to him in the country which he esteemed so highly; his Government has remembered the follies of his old age rather than its privileges, and his memory has suffered accordingly. But what is past is past. My memory remains faithfully and affectionately attached to my native land; my sole thought is to love and honour her. It is of Belgium that I wish to speak before passing on to the Courts of Vienna, Berlin, Munich and Sofia, and to the many doings which these names recall, certain of which deserve better knowledge and consideration.

My Own Affairs As the eldest daughter of a great man and a great King, whose magnificent intelligence has enriched his people, I owe nothing but misfortune to m

As the eldest daughter of a great man and a great King, whose magnificent intelligence has enriched his people, I owe nothing but misfortune to my royal origin.

A review of the affairs of France: and of all Europe, as influence'd by that nation [by D. Defoe. Continued as] A review of the state of the English (British) nation

Authors: Review of the affairs of France
Categories:

The Journal of Jurisprudence

Musaicum Books presents to you this carefully created collection of 'THE COMPLETE WORKS OF E. F. BENSON (Illustrated Edition)'. This ebook has been designed and