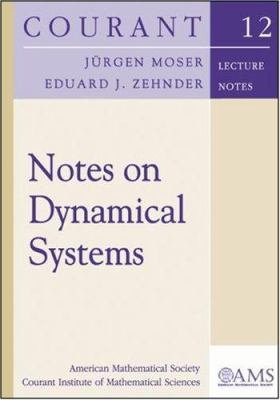 This book is an introduction to the field of dynamical systems, in particular, to the special class of Hamiltonian systems. The authors aimed at keeping the requirements of mathematical techniques minimal but giving detailed proofs and many examples and illustrations from physics and celestial mechanics. After all, the celestial $N$-body problem is the origin of dynamical systems and gave rise in the past to many mathematical developments. Jurgen Moser (1928-1999) was a professor atthe Courant Institute, New York, and then at ETH Zurich. He served as president of the International Mathematical Union and received many honors and prizes, among them the Wolf Prize in mathematics. Jurgen Moser is the author of several books, among them Stable and Random Motions in DynamicalSystems. Eduard Zehnder is a professor at ETH Zurich. He is coauthor with Helmut Hofer of the book Symplectic Invariants and Hamiltonian Dynamics. Information for our distributors: Titles in this series are copublished with the Courant Institute of Mathematical Sciences at New York University.