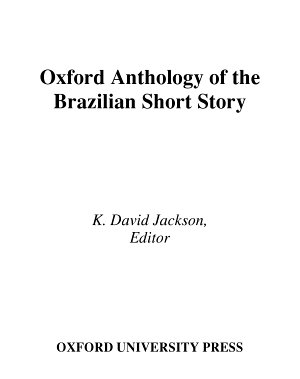 The Oxford Anthology of the Brazilian Short Story contains a selection of short stories by the best-known authors in Brazilian literature from the late nineteenth century to the present. With few exceptions, these stories have appeared in English translation, although widely separated in time and often published in obscure journals. Here they are united in a coherent edition representing Brazil's modern, vibrant literature and culture. J.M. Machado de Assis, who first perfected the genre, wrote at least sixty stories considered to be masterpieces of world literature. Ten of his stories are included here, and are accompanied by strong and diverse representations of the contemporary story in Brazil, featuring nine stories by Clarice Lispector and seven by Joao Guimaraes Rosa. The remaining 34 authors include Mario de Andrade, Graciliano Ramos, Osman Lins, Dalton Trevisan, and other major names whose stories in translation exhibit profound artistry. The anthology is divided into four major periods, "Tropical Belle-Epoque," "Modernism," "Modernism at Mid-Century," and "Contemporary Views." There is a general introduction to Brazilian literary culture and introductions to each of the four sections, with descriptions of the authors and a general bibliography on Brazil and Brazilian literature in English. It includes stories of innovation (Mario de Andrade), psychological suspense (Graciliano Ramos), satire and perversion (Dalton Trevisan), altered realities and perceptions (Murilo Rubiao), repression and sexuality (Hilda Hilst, Autran Dourado), myth (Nelida Pinon), urban life (Lygia Fagundes Telles, Rubem Fonescal), the oral tale (Jorge Amado, Rachel de Queiroz) and other overarching themes and issues of Brazilian culture. The anthology concludes with a haunting story set in the opera theater in Manaus by one of Brazil's most recently successful writers, Milton Hatoum.

There is a wealth of published literature in English by Latin American women writers, but such material can be difficult to locate due to the lack of available

The relationship of texts and maps, and the mappability of literature, examined from Homer to Houellebecq. Literary authors have frequently called on elements o

The Third Bank of the River

During the 2014 World Cup, an isolated Amazonian tribe emerged from the jungle on the misty border of Peru and Brazil, escaping massacre at the hands of illegal

The Rough Guide to Rio de Janeiro is the essential travel guide with clear maps and coverage of Rio de Janeiro's unforgettable attractions. From the Christ stat

This collection brings together 53 stories that span the history of Latin American literature and represent the most dazzling achievements in the form. It cover

This is the first volume of critical essays in English on the much-studied Lima Barreto. Each chapter explores not only his life and vast body of work but also