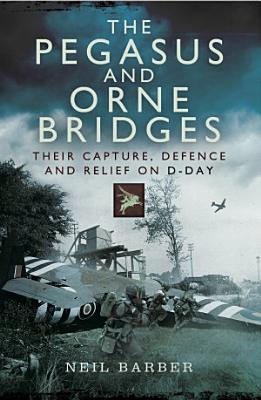 This WWII history chronicles a daring airborne mission that was vital to the success of Operation Tonga, D-Day, and the liberation of France. When the British Army landed on Sword Beach in Normandy, their only exit eastward required passage across the River Orne and the Caen Canal. But the two bridges fording these waterways—the Pegasus and Orne Bridges—were heavily guarded and wired for demolition in case of a Germans retreat. Capturing these bridges would be next to impossible. Operation Deadstick, conducted by Major John Howard and his company of Oxford and Buckinghamshire Light Infantry, was a superbly daring, brilliantly executed 'coup de main' assault. The glider-borne troops not only seized both bridges but faced a ferocious and prolonged German counterattack. Neil Barber, a military historian and expert in British airborne operations, uses extensive personal accounts to tell this incredible story of Allied victory. Covering events and operations from Ranville in the East to Benouville in the West, Pegasus and Orne Bridges chronicles the combat of the 7th, 12th and 13th Parachute Battalions and reinforcements such as the Commandos, seaborne engineers and the Warwicks.

The Pegasus and Orne Bridges

This WWII history chronicles a daring airborne mission that was vital to the success of Operation Tonga, D-Day, and the liberation of France. When the British A

The Pegasus and Orne Bridges

The glider-borne operation to capture Pegasus Bridge has an established place in the annals of warfare. Conducted by Major John Howard and his company of Oxford

This battlefield guide is the companion work to Merville Battery & The Dives Bridges. Together, these two books form the fully revised and updated edition of th

The night before D-Day, light infantry and a detachment of Royal Engineers landed by gliders at Pegasus Bridge, which spanned the Caen Canal. Quickly overwhelmi

In the early morning hours of June 6, 1944, a small detachment of British airborne troops stormed the German defense forces and paved the way for the Allied inv

NATIONAL BESTSELLER • Alex Kershaw, author of The Longest Winter and The Liberator, returns with an utterly immersive, adrenaline-driven account of D-Day comb

At 0016hrs on 6 June 1944 a Horsa glider ground to a halt a mere 60 yards from the Orne Canal bridge at Bénouville in Normandy. A small group of British paratr

Whether you want to explore the historical towns of Normandy, contemplate the evocative relics of war at the Landing Beaches, or sip the finest Calvados in pict

From the scaling of Pointe-du-Hoc and the assault on Pegasus Bridge, to the landings on the Utah, Omaha, Gold, Juno, and Sword beaches, this new Campaign Book f

Published in partnership with the National Archives, D-Day Documents is a commemorative collection of previously unpublished documents marking the 70th annivers