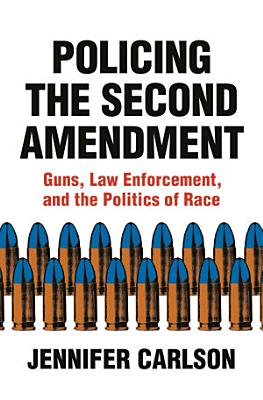 An urgent look at the relationship between guns, the police, and race The United States is steeped in guns, gun violence—and gun debates. As arguments rage on, one issue has largely been overlooked—Americans who support gun control turn to the police as enforcers of their preferred policies, but the police themselves disproportionately support gun rights over gun control. Yet who do the police believe should get gun access? When do they pursue aggressive enforcement of gun laws? And what part does race play in all of this? Policing the Second Amendment unravels the complex relationship between the police, gun violence, and race. Rethinking the terms of the gun debate, Jennifer Carlson shows how the politics of guns cannot be understood—or changed—without considering how the racial politics of crime affect police attitudes about guns. Drawing on local and national newspapers, interviews with close to eighty police chiefs, and a rare look at gun licensing processes, Carlson explores the ways police talk about guns, and how firearms are regulated in different parts of the country. Examining how organizations such as the National Rifle Association have influenced police perspectives, she describes a troubling paradox of guns today—while color-blind laws grant civilians unprecedented rights to own, carry, and use guns, people of color face an all-too-visible system of gun criminalization. This racialized framework—undergirding who is “a good guy with a gun” versus “a bad guy with a gun”—informs and justifies how police understand and pursue public safety. Policing the Second Amendment demonstrates that the terrain of gun politics must be reevaluated if there is to be any hope of mitigating further tragedies.

An urgent look at the relationship between guns, the police, and race The United States is steeped in guns, gun violence—and gun debates. As arguments rage on

For years proposals for gun control and the ownership of firearms have been among the most contentious issues in American politics. For public authorities to ma

Merchants of the Right

An eye-opening portrait of the gun sellers who navigated the social turmoil leading up to the January 6 Capitol attack Gun sellers sell more than just guns. The

Schools, theatres and malls used to be safe havens. Marathons were triumphal, not tragic. Today, public life is risky. Citizens are on edge, either calling for

Guns, Crime, and Punishment in America

The Constitution of the United States, writes Bryan Fair, was a series of compromises between white male propertyholders: Southern planters and Northern merchan

Written and extensively updated by an author team that includes former and current law enforcement officers, Introduction to Policing focuses on the thought-pro

Focusing on the thought-provoking, contemporary issues that underscore the challenging world of policing, this easy-to-understand text balances theory, research

"It pulls no punches, shuns no controversial topic, and glosses over no issues or problems that beset America’s law enforcement community in our day. For thos