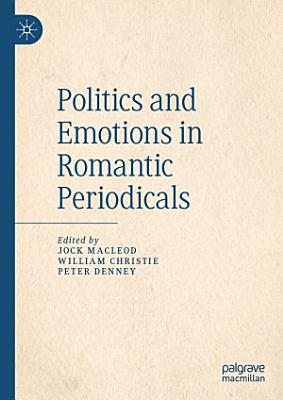 This book comprises eleven essays by leading scholars of early nineteenth-century British literature and periodical culture. The collection addresses the many and varied links between politics and the emotions in Romantic periodicals, from the revolutionary decade of the 1790s, to the 1832 Reform Bill. In so doing, it deepens our understanding of the often conflicted relations between politics and feelings, and raises questions relevant to contemporary debates on affect studies and their relation to political criticism. The respective chapters explore both the politics of emotion and the emotional register of political discussion in radical, reformist and conservative periodicals. They are arranged chronologically, covering periodicals from Pigs’ Meat to Blackwood’s Edinburgh Magazine and the Spectator. Recurring themes include the contested place of emotion in radical political discourse; the role of the periodical in mediating action and performance; the changing affective frameworks of cultural politics (especially concerning gender and nation), and the shifting terrain of what constitutes appropriate emotion in public political discourse.

Politics and Emotions in Romantic Periodicals

This book comprises eleven essays by leading scholars of early nineteenth-century British literature and periodical culture. The collection addresses the many a

As the nineteenth century came to an end, a number of voices within the British and American magazine industries pushed back against serialisation as the domina

Building on a revival of scholarly interest in the cultural effects of early 19th-century periodicals, the essays in this collection treat periodical writing as

A Cultural History of the Emotions in the Age of Romanticism, Revolution, and Empire

Between 1780 and 1920, modern conceptions of emotion-conceptions still very much present in the 21st century-first took shape. This book traces that history, ch

Preface: notes on the sociology of emotions in Europe / Jochen Kleres --Introduction: an emotions lens on the world / Arlie Russell Hochschild -- Consciousness,

The most trustworthy source of information available today on savings and investments, taxes, money management, home ownership and many other personal finance t