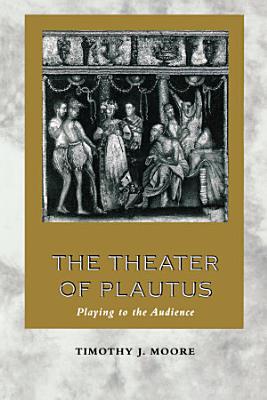 The relationship between actors and spectators has been of perennial interest to playwrights. The Roman playwright Plautus (ca. 200 BCE) was particularly adept at manipulating this relationship. Plautus allowed his actors to acknowledge freely the illusion in which they were taking part, to elicit laughter through humorous asides and monologues, and simultaneously to flatter and tease the spectators. These metatheatrical techniques are the focus of Timothy J. Moore's innovative study of the comedies of Plautus. The first part of the book examines Plautus' techniques in detail, while the second part explores how he used them in the plays Pseudolus, Amphitruo, Curculio, Truculentus, Casina, and Captivi. Moore shows that Plautus employed these dramatic devices not only to entertain his audience but also to satirize aspects of Roman society, such as shady business practices and extravagant spending on prostitutes, and to challenge his spectators' preconceptions about such issues as marriage and slavery. These findings forge new links between Roman comedy and the social and historical context of its performance.

The Theater of Plautus

The relationship between actors and spectators has been of perennial interest to playwrights. The Roman playwright Plautus (ca. 200 BCE) was particularly adept

This new commentary on Pseudolus provides an excellent introduction to current trends and advances in the study of Roman comedy.

The Pseudolus of Plautus

First published in 1985. In this revisionist history of comic characterization, Karen Newman argues that, contrary to received opinion, Shakespeare was not the

The Pseudolus of Plautus. Edited ... by H.W. Auden