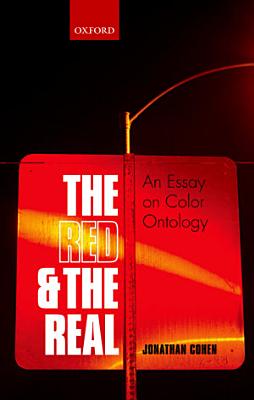 The Red and the Real offers a new approach to longstanding philosophical puzzles about what colors are and how they fit into the natural world. Jonathan Cohen argues for a role-functionalist treatment of color - a view according to which colors are identical to certain functional roles involving perceptual effects on subjects. Cohen first argues (on broadly empirical grounds) for the more general relationalist view that colors are constituted in terms of relations between objects, perceivers, and viewing conditions. He responds to semantic, ontological, and phenomenological objections against this thesis, and argues that relationalism offers the best hope of respecting both empirical results and ordinary belief about color. He then defends the more specific role functionalist-account by contending that the latter is the most plausible form of color relationalism.

The Red and the Real

The Red and the Real offers a new approach to longstanding philosophical puzzles about what colors are and how they fit into the natural world. Jonathan Cohen a

Two Dozen (or so) Arguments for God

Thirty years ago, Alvin Plantinga gave a lecture called "Two Dozen (or so) Theistic Arguments," which served as an underground inspiration for two generations o

Providing a first time look at the long-hidden world of Soviet psychology, this volume assembles a group of psychologists from both Russia and the United States

Proceeding of the International Science and Technology Conference "FarEastСon 2019"

This book presents the proceedings of the International Science and Technology Conference “FarEastCon 2019,” which took place on October 1–4, 2019, in Vla

This volume examines two main questions: What is linguistics about? And how do the results of linguistic theorizing bear on inquiry in related fields, particula

What are mental states? When we talk about people’s beliefs or desires, are we talking about what is happening inside their heads? If so, might cognitive scie

The Body in Mind

This book offers a radical externalist or environmentalist model of cognitive processes.

It is commonly held that our thoughts, beliefs, desires and feelings - the mental phenomena that we instantiate - are constituted by states and processes that o