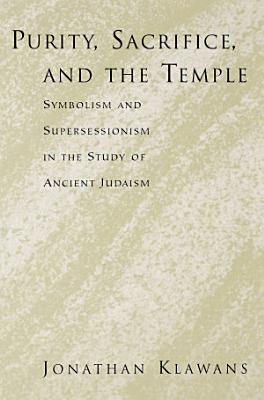 Ancient Jewish sacrifice has long been misunderstood. Some find in sacrifice the key to the mysterious and violent origins of human culture. Others see these cultic rituals as merely the fossilized vestiges of primitive superstition. Some believe that ancient Jewish sacrifice was doomed from the start, destined to be replaced by the Christian eucharist. Others think that the temple was fated to be superseded by the synagogue. In Purity, Sacrifice, and the Temple Jonathan Klawans demonstrates that these supersessionist ideologies have prevented scholars from recognizing the Jerusalem temple as a powerful source of meaning and symbolism to the ancient Jews who worshiped there. Klawans exposes and counters such ideologies by reviewing the theoretical literature on sacrifice and taking a fresh look at a broad range of evidence concerning ancient Jewish attitudes toward the temple and its sacrificial cult. The first step toward reaching a more balanced view is to integrate the study of sacrifice with the study of purity-a ritual structure that has commonly been understood as symbolic by scholars and laypeople alike. The second step is to rehabilitate sacrificial metaphors, with the understanding that these metaphors are windows into the ways sacrifice was understood by ancient Jews. By taking these steps-and by removing contemporary religious and cultural biases-Klawans allows us to better understand what sacrifice meant to the early communities who practiced it. Armed with this new understanding, Klawans reevaluates the ideas about the temple articulated in a wide array of ancient sources, including Josephus, Philo, Pseudepigrapha, the Dead Sea Scrolls, New Testament, and Rabbinic literature. Klawans mines these sources with an eye toward illuminating the symbolic meanings of sacrifice for ancient Jews. Along the way, he reconsiders the ostensible rejection of the cult by the biblical prophets, the Qumran sect, and Jesus. While these figures may have seen the temple in their time as tainted or even defiled, Klawans argues, they too-like practically all ancient Jews-believed in the cult, accepted its symbolic significance, and hoped for its ultimate efficacy.

Purity, Sacrifice, and the Temple

Ancient Jewish sacrifice has long been misunderstood. Some find in sacrifice the key to the mysterious and violent origins of human culture. Others see these cu

Sacrifice and Gender in Biblical Law

The Temple of Jesus

The first study to develop a theory of sacrifice and then apply it to the sources of early Judaism as well as Jesus's activity. Ritual sacrifice was one of the

Christ Died for Our Sins

In Christ Died for Our Sins, Jarvis J. Williams argues a twofold thesis: First, that Paul in Romans presents Jesus' death as both a representation of, and a sub

Josephus and the Theologies of Ancient Judaism

Though considered one of the most important informants about Judaism in the first century CE, the Jewish historian Flavius Josephus's testimony is often overloo

The Asia Bible Commentary Series empowers Christian believers in Asia to read the Bible from within their respective contexts. Holistic in its approach to the t

It is commonly asserted that heresy is a Christian invention that emerged in late antiquity as Christianity distinguished itself from Judaism. Heresy, Forgery,

A philosophical case against religious violence We live in an age beset by religiously inspired violence. Terms such as “holy war” are the stock-in-trade of