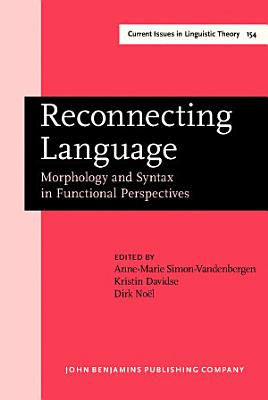 Although the contributors to this book do not belong to one particular ‘school’ of linguistic theory, they all share an interest in the external functions of language in society and in the relationship between these functions and internal linguistic phenomena. In this sense they all take a functional approach to grammatical issues. Apart from this common starting-point, the contributions share the aim of demonstrating the non-autonomous nature of morphology and syntax, and the inadequacy of linguistic models which deal with syntax, morphology and lexicon in separate, independent components. The recurrent theme throughout the book is the inseparability of lexis and morphosyntax, of structure and function, of grammar and society. The third and more specific common thread is case, which in some contributions is adduced to illustrate the more general point of the link between word form on the one hand and clausal and textual relations on the other hand, while in other papers it is at the centre of the discussion. The interest of the proposed volume consists in the fact that it brings together the views of leading scholars in functional linguistics of various ‘denominations’ on the place of morphosyntax in linguistic theory. The book provides convincing argumentation against a modular theory with autonomous levels (the dominant framework in mainstream 20th century linguistics) and is a plea for further research into the connections between the lexicogrammar and the linguistic and extralinguistic context.

Although the contributors to this book do not belong to one particular ‘school’ of linguistic theory, they all share an interest in the external functions o

This classroom-tested volume aspires to be a brief but technically and factually accurate exposition of linguistic description and history. Whether studied as p

Standard Languages and Language Standards – Greek, Past and Present

Standard Languages and Language Standards: Greek, Past and Present is a collection of essays with a distinctive focus and an unusual range. It brings together s

Language in its multifarious aspects

This exceptional book of selected essays by the leading Czech linguist and member of the Prague Linguistic Circle contains 26 essays in English and 4 in German.

Textual Parameters in Older Languages takes a contemporary approach to the inherent limitations of using older texts as data for linguistic analysis, drawing on

An openly polemical work, Reconnection seeks a way of returning the humanities to their place at the center of human life. For the past three hundred years, to

Although the contributors to this book do not belong to one particular 'school' of linguistic theory, they all share an interest in the external functions of la

This book is based on the results of research in language typology, and motivated by the need for a theory to explain them. The essence of the approach is (a) t

Accessibility and Acceptability in Technical Manuals

"Accessibility and Acceptability in Technical Manuals" is written for an audience with a general interest in readability studies, linguistics and technical writ