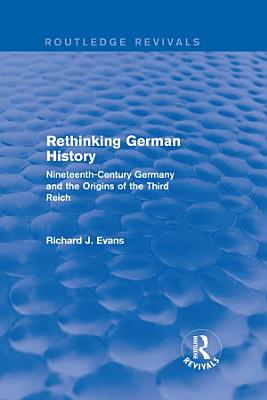 In Rethinking German History, first published in 1987, Richard J. Evans argues for a social-historical approach to the German past that pays equal attention to objective social structures and subjective values and experiences. If German history has been seen as an exception to the ‘normal’ development of Western society, this is not least because historians have until recently largely failed to look beyond the world of high politics, institutions, organizations and ideologies to broader historical problems of German society and German mentalities. By applying and adapting approaches learned from French and British social history as they have been developed over the last quarter of a century, it is possible to achieve a rethinking of German history which does away with many of the textbook myths that have encrusted the historiogrpahy of Germany for so long. This book will be valuable for students of German history and politics, and brings together essays widely used in teaching. Its broad coverage of social history will also be useful to all those interested in contemporary historiography or the comparative study of European history.

In Rethinking German History, first published in 1987, Richard J. Evans argues for a social-historical approach to the German past that pays equal attention to

Originally published in 1954, this book presents the view of nine liberal German historians in reconsideration of the dominant concepts of German political and

Writing on the history of German women has - like women's history elsewhere - undergone remarkable expansion and change since it began in the late 1960s. Today

This book examines the origins of Wilhelmine Germany's "Tirpitz Plan" of naval rearmament. The evolution of the Imperial Navy's strategic theories is compared w

A comprehensive account of how German and American historians after World War II tackled the question of the roots of National Socialism, History After Hitler t

This collection of essays examines the construction of gender norms in early modern and modern Germany.; The modes of reinforcement by the state, the church, th

This 1995 book contributes to both modern German history and to the sociological understanding of crime in modern industrial and urban societies. Its central ar

A study of the content, development, and transmission of German identity during the nineteenth century as Germany's national narrative took shape in historical

Germany from the Outside

Conference proceedings of Germany from the Outside held in September 2019 at the University of Illinois Urbana-Champaign.