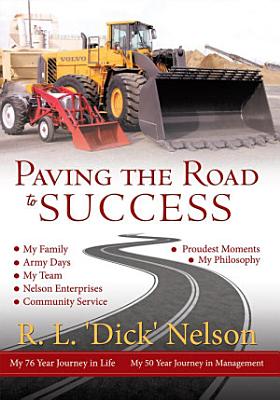 Fifty years ago, Richard L. "Dick" Nelson started his career with a small loader. He established his business in Princeton, Illinois, a small rural community with a current population of 7,600. today, he is the founder of Nelson Enterprises which includes Advanced Asphalt Company, TCI Manufacturing and Sales, Tri-Con Materials, Northwest Illinois Construction LLC, Pavement Maintenance Services, Inc., D&J Leasing and AAA Aviation LLC. Nelson Enterprises has achieved $1.5 billion in total sales, has worldwide patent recognition, employs approximately 300 people and rents 100 trucks a day during construction season. Dick is the son of Malcolm and Frances Nelson (both deceased) and was raised in Princeton with five siblings (three of whom are deceased). He is a graduate of Princeton High School and served in the Army. He and his wife, Judy, have three grown children, Leanne (Jeff) Martin, Laurie Wallace and Steve (Gina) Nelson. They also have four grandchildren, Nicole Martin, Kelsey Wallace, Colin and Audrey Nelson. Dick attributes much of his success to his "team" of talented and dedicated professionals. He has also achieved success and national awards because of his God given mechanical talent, hard work, determination and what he calls a "Bachelor of Common Sense Degree from Life University". Dick has contributed a multitude of volunteer service hours to the Princeton Park Board, United Way, Cub Scouts, Little League and St. Matthew's Church. His passion is flying. And to that end, he built his own helicopter. In honor of his 50th anniversary in business, an open house was held to recognize his "team" and business milestones. At this event, the Nelson family established an annual scholarship at Princeton High School for a senior student planning to attend a vocational school. Doug Oberhelman, CEO of Caterpillar, was also in attendance at the open house and announced that Caterpillar will match the Nelson family annual scholarship. This is a tribute to the Nelson family and Nelson Enterprises for service to the community, central Illinois and the State of Illinois.

Paving the Road to Success

Fifty years ago, Richard L. "Dick" Nelson started his career with a small loader. He established his business in Princeton, Illinois, a small rural community wi

Finding Your Road to Success

Do you ever feel like everyone around you is succeeding, leaving you behind feeling unhappy and unsatisfied with your life? Ever wonder how some people succeed

THE ROAD TO SUCCESS COLLECTION

The concept of New Thought promotes the ideas that Infinite Intelligence, or God, is everywhere, spirit is the totality of real things, true human selfhood is d

YOU YOURSELF ARE A ROAD TO SUCCESS

This book is based on the real life scenarios which occur in each and everyone' life at one point. This author has tried to give you the external motivation whi

Instructional Coaches and Classroom Teachers: Sharing the Road to Success

Coaches and teachers alike will benefit from the research-based, classroom-tested coaching model discussed in this book. This unique look at instructional coach

Your Path to Success

Follow the quest of Captain Morgan Starseeker. His questions to the wise Ram Sri Omega and surprising replies. Spiritual and personal development tools. The sev

Journey To Success describes the plight of a young man determined to succeed while growing up on the south side of Chicago. The book describes success by examin

Have you set yourself goals for this coming year? Do you want to reduce anxiety? By making the impossible possible, this book is the blueprint for success in ac