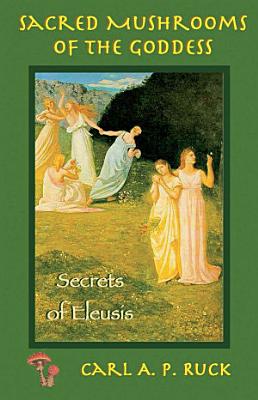 In the ancient world, men and women joined cults known as Mysteries to unite with the deities of the otherworld and achieve eternal life. The most important of the Mysteries existed for two millennia at the village of Eleusis. Its deities were Demeter and Persephone, interchangeable in their roles as mother and daughter. The initiations and other rituals of this goddess-based cult were a profound secret: divulging information was punishable by death. For centuries, scholars have probed the secrets of the Eleusinian Mysteries and kykeon, its sacramental Eucharist — a sacred drink containing psychoactive chemicals similar to those in LSD. Their discoveries have been buried in the arcane language of alchemy, the occult sciences, and secret societies. Here, in prose accessible to all readers, Carl Ruck unravels the Mysteries, revealing the awesome powers of the goddesses, as well as the pagan underpinnings of Western culture.

In the ancient world, men and women joined cults known as Mysteries to unite with the deities of the otherworld and achieve eternal life. The most important of

Describes the dramatic effects people experience when consuming psychoactive mushrooms. There are over 100 "entheogenic" fungi known to stimulate ecstatic state

In the ancient world, men and women joined cults known as Mysteries to unite with the deities of the otherworld and achieve eternal life. The most important of

Over 30 contributors share their expertise on the chemical, biological, cultural, psychological, and experiential dimensions of psilocybin mushrooms • Describ

Magic Mushrooms in Religion and Alchemy

An illustrated foray into the hidden truth about the use of psychoactive mushrooms to connect with the divine. • Draws parallels between Vedic beliefs and Jud

The Shamanic Plant Medicine series acts as an introduction to specific teacher plants used by shamans in a variety of cultures to facilitate spirit communion, h

The Sacred Mushrooms of Mexico

This work presents significant new readings in ethnomycology, a discipline that examines the role of fungi in human affairs. The greatest cultural and historica

Classic manual on home cultivation of psilocybin mushrooms - a must-have for any enthusiast.

Technicians of the Sacred, Third Edition

"A wide-ranging anthology of ethnopoetry including origin texts, visionary texts, texts about death, texts about events--collected from Africa, the Americas, As