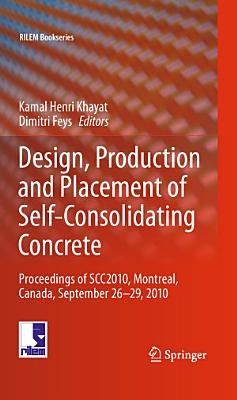 Dear Colleagues, We are pleased to organize the Sixth International RILEM Symposium on SCC and the Fourth North-American Conference on the Design and Use of SCC, held on Sept 26-29, 2010 in Montreal, Quebec, Canada. The RILEM series of symposia started in 1999 in Stockholm, followed by Tokyo in 2001, Reykjavik in 2003, Chicago in 2005, and Ghent in 2007 with a steadily increasing number of papers, participants, and interest from across the globe. Due to the growing success of SCC, regional conferences have been organized, such as the North-American Conference on the Design and Use of SCC held in Chicago in 2002, 2005, and 2008; the International Symposium on Design, Performance and Use of SCC held nd in Changsa, China in 2005 and in Beijing, China in 2009; as well as the 2 International Conference on Advances in Concrete Technology in the Middle East: SCC held in Abu Dhabi in 2009. It can be concluded that these regional Conferences and Symposia were highly successful and reached a far more international audience than anticipated. Nearly 100 papers were submitted for these proceedings from which the International Scientific Committee selected 37 contributions covering a wide range of timely and original subjects from around the world. We would like to acknowledge the input of the International Scientific Committee for providing critical input to guarantee high quality of these peer-reviewed proceedings. We invite you to explore a wealth of information in the electronic proceedings.