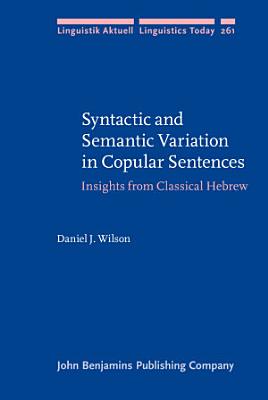 This book presents a novel account of syntactic and semantic variation in copular and existential sentences in Classical Hebrew. Like many languages, the system of Classical Hebrew copular sentences is quite complex, containing zero, pronominal, and verbal forms as well as eventive and inchoative semantics. Approaching this subject from the framework of Distributed Morphology provides an elegant and comprehensive explanation for both the syntactic and semantic variation in these sentences. This book also presents a theoretical model for analyzing copular sentences in other languages included related phenomena– such as pseudo-copulas. It is also a demonstration of what can be gained by applying modern linguistic analyses to dead languages. Citing and building off previous studies on this topic, this book will be of interest to those interested in the theoretical examination of copular and existential sentences and to those interested in Classical Hebrew more specifically.

This book presents a novel account of syntactic and semantic variation in copular and existential sentences in Classical Hebrew. Like many languages, the system

Explores why different languages have systematically different ways of saying the same thing. It focuses on adjectival predication and shows that systematic dif

Research papers, previously published in the Annals of Oriental Research, University of Madras.

This book presents novel data from endangered languages and cultures that are ever so often still not focused on. It combines different disciplines to capture t

Indefinites Between Latin and Romance

This book investigates the syntactic and semantic development of a selection of indefinite pronouns and determiners (such as aliquis 'some', nullus 'no', and ne

This volume, a tribute to François Gros and a celebration of the field of Tamil studies, demonstrates the international nature of this area and its wide range

Where is the locus of language variation? In the grammar, outside the grammar or somewhere in between? Taking up the debate between system- and usage-based appr

Maurizio Gotti analyses the various features of specialized discourse in order to assess its degree of specificity and diversification, as compared to general l

Although the contributors to this book do not belong to one particular 'school' of linguistic theory, they all share an interest in the external functions of la