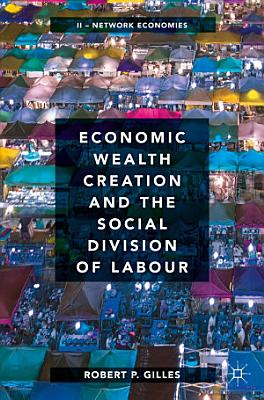 ‘This is the second book of a two-volume set that continues Adam Smith's work, using the tools mathematical, experimental, and behavioural economists have developed since 1776. As in the first volume, markets are not the central organising principle. Instead, attention centres on social institutions and the division of labour that they enable. The book studies this via the endogenous division of labour that existing institutions help form. The first book in the series examined this problem deeply, resorting minimally to formal mathematical modelling; the second volume is where the formal modelling blossoms. General equilibrium theory meets network theory and receives a breath of fresh air, including a new viewpoint on economic inequality, the newly resurgent bane of capitalism. What I said for the first volume applies to this second volume equally: if you care to understand the economy, this book belongs to your bookshelf.’ —Dimitrios Diamantaras, Temple University, Philadelphia, USA This textbook introduces and develops new tools to understand the recent economic crisis and how desirable economic policies can be adopted. Gilles provides new institutional concepts for wealth creation, such as network economies, which are based on the social division of labour. This second volume introduces mathematical theories of the endogenous formation of social divisions of labour through which economic wealth is created. Gilles also investigates the causes of inequality in the social division of labour under imperfectly competitive conditions. These theories frame a comprehensive, innovative and consistent perspective on the functioning of the twenty-first century global economy, explaining many of its failings. Suitable reading for advanced undergraduate, MSc and postgraduate students in microeconomic analysis, economic theory and political economy.

Economic Wealth Creation and the Social Division of Labour

‘This is the second book of a two-volume set that continues Adam Smith's work, using the tools mathematical, experimental, and behavioural economists have dev

The Wealth or Health of Nations

Why has our society become so focused on money--and at what human cost? Carol Johnston explores the value assumptions of Western economic theory, revealing what

Towards an Anthropology of Wealth

Aiming to redefine the concept of wealth, which has too often been reduced to merely ‘accumulated assets’, this book views wealth primarily as a question of

A critical analysis of contemporary art collections and the value form, this book shows why the nonprofit system is unfit to administer our common collections,

The Law of Sovereign Wealth Funds

Bassan provides a remarkable compendium on the relevant laws, regulations, and standards affecting sovereign wealth funds. These institutions are now at the ver

The West is currently in the grip of a perfect storm: a lingering economic recession, a global refugee crisis, declining faith in multiculturalism, and the rise

In order to understand the impact of Smith's text across the academic disciplines, this volume brings together leading scholars from fields of economics, politi