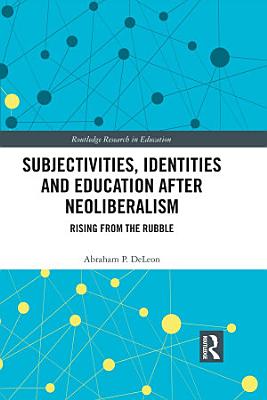 In this book, DeLeon presents a critique of neoliberalism and present times through a metaphor of social collapse and considers what remains once the dust has settled for a different kind of person to emerge. Engaging a variety of social, political and educational theories, along with pop culture and literature, DeLeon positions humanity at the edges of collapse and what will emerge after the fall. Engaging academic and fictional alternatives, he imagines future possibilities through a new kind of person that rises from the rubble. Questioning the foundations of empiricism, standardization and "reproducible" results that reject new forms of social and political projects from materializing, DeLeon discusses the potentials of the imagination and the ways in which it can produce alternative possibilities for our collective future when unleashed and combined with fictional narratives. Moving across multiple intellectual, philosophical, artistic, and historical traditions, he constructs a radical, interdisciplinary vision that challenges us to think about transforming our collective future(s), one in which we construct a new kind of person ready to tackle the challenges of a potentially liberatory future and what this might entail.

Subjectivities, Identities, and Education after Neoliberalism

In this book, DeLeon presents a critique of neoliberalism and present times through a metaphor of social collapse and considers what remains once the dust has s

Subjectivities, Identities, and Education after Neoliberalism

In this book, DeLeon presents a critique of neoliberalism and present times through a metaphor of social collapse and considers what remains once the dust has s

This book discusses the central role education and research play in generating both value and comparative advantages in the (imageries of) global competition, c

Curriculum, Environment, and the Work of C. A. Bowers

This edited volume extends ecological approaches to curriculum theory by recognizing and building on the contributions of the late Chet A. Bowers to curriculum

This book aims to provide theoretical discussions of assessment development and implementation in mathematics education contexts, as well as to offer readers di

Arts-Based Teaching and Learning in the Literacy Classroom

This book highlights the unique and co-generative intersections of the arts and literacy that promote critical and socially engaged teaching and learning. Based

The aim of this book is to explore measures of mathematics knowledge, spanning K-16 grade levels. By focusing solely on mathematics content, such as knowledge o

Examining the Use of Online Social Networks by Korean Graduate Students

This book examines how former, current and prospective Korean graduate students navigate American universities, especially with regard to the student-advisor re

The Emergence of Postfeminist Identities in Higher Education

By drawing on qualitative research conducted in universities in Cyprus, this book presents an account of life in the academy from a feminist perspective. In doi

Education and Political Subjectivities in Neoliberal Times and Places