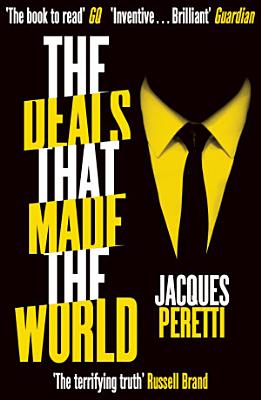 'The book to read' GQ 'A revelatory book' John Lewis-Stempel While the laws that guide our lives are written by the politicians we elect, much of the world around us - from the food we eat to the products we buy to the medications we take - is shaped by private negotiations and business deals few of us know about. For twenty years, Peretti has interviewed the people behind the decisions that have altered our world, from CEOs of multinational corporations to politicians, economists, and scientists. In The Deals that Made the World, Peretti draws on his vast knowledge to reveal a host of fascinating and startling connections, from how Wall Street's actions on food commodities helped spark the Arab Spring to the link between the AIDS epidemic in 1980s San Francisco and the subprime mortgage crisis of 2008. He proves a sure guide, combining both eye-opening on-the-ground reporting and a narrative flair that makes esoteric financial and business concepts clear and understandable. Like Steven Levitt, Nassim Nicholas Taleb, Brad Stone, Michael Lewis, and Malcolm Gladwell, Peretti takes the ordinary and turns it inside out to give us a compelling new perspective on our lives and our world.

The Deals that Made the World

'The book to read' GQ 'A revelatory book' John Lewis-Stempel While the laws that guide our lives are written by the politicians we elect, much of the world arou

'That nickname . . .' '"Little bird." It wasn't mine. I found out later he gave it to every little girl that came in to be injected. "Little Bird" didn't mean a

What if the way we understand our world is wrong? What if it isn't politicians and events that shape our lives, but secret deals made by people you've never hea

Canadian Culture in a Globalized World

Since the first trade deal with the US in 1987, Canada has insisted on a "cultural exemption" to ensure that governments were free to protect Canadian culture a

"This is a book of World Sports - A Reference Handbook"--

Far from regarding the law as supreme, corporations approach law as an element of executive thought and action aimed at optimizing competitiveness. The objectiv