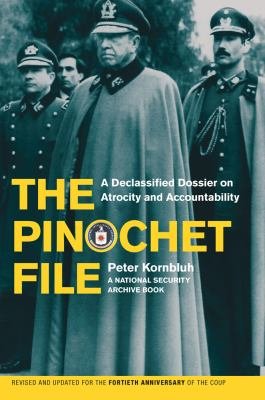 Revised and updated for the fortieth anniversary of Augusto Pinochet’s September 11, 1973, military coup in Chile, The Pinochet File reveals a formerly secret record of complicity with atrocity on the part of the U.S. government. Documents that were first made publicly available in the original hardcover edition formed the heart of the international campaign to hold Pinochet accountable for murder,­ torture, and ­terrorism—a campaign chronicled for the first time in this updated edition. Peter Kornbluh spearheaded the effort to declassify some 24,000 secret CIA, White House, National Security Council, and Defense Department records on Chile, and when The Pinochet File was first published in 2003, Marc Cooper wrote in the Los Angeles Times, “Thanks to Peter Kornbluh, we have the first complete, almost day–to–day and fully documented record of this sordid chapter in Cold War American history.” With the publication of this edition, that record becomes even more complete. This book now includes the story of Pinochet’s 2004 indictment and trial, as well as new information about the famous cases of the American Charles Horman and Chilean folk singer Victor Jara—both executed by Pinochet’s military after the coup. The new afterword also tells the story of The Pinochet File itself: Henry Kissinger’s attempt to undercut the book’s reception generated a major scandal that led to high–level resignations at the Council on Foreign Relations, illustrating the continued ability of the book to speak truth to power.

Revised and updated for the fortieth anniversary of Augusto Pinochet’s September 11, 1973, military coup in Chile, The Pinochet File reveals a formerly secret

Revised and updated: the definitive primary-source history of US involvement in General Pinochet’s Chilean coup—“the evidence is overwhelming” (The New

Tapestries of Hope, Threads of Love

In from the Cold

The United States has shaped Latin American history, condemning it to poverty and inequality by intervening to protect the rich and powerful. America’s Backya

During the two years just before the 1998 arrest in London of General Augusto Pinochet, the historian Steve J. Stern had been in Chile collecting oral histories

Facts are and must be the coin of the realm in a democracy, for government "of the people, by the people and for the people," requires and assumes to some exten

For the 50th anniversary of the Watergate break-in: The untold story of President Richard Nixon, CIA Director Richard Helms, and their volatile shared secrets t