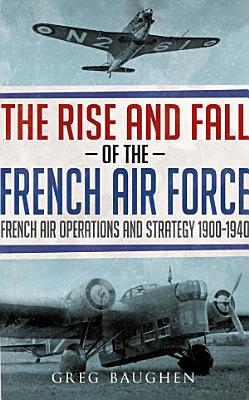 On 10 May 1940, the French possessed one of the largest air forces in the world. On paper, it was nearly as strong as the RAF. Six weeks later, France had been defeated. For a struggling French Army desperately looking for air support, the skies seemed empty of friendly planes. In the decades that followed, the debate raged. Were there unused stockpiles of planes? Were French aircraft really so inferior? Baughen examines the myths that surround the French defeat. He explains how at the end of the First World War, the French had possessed the most effective air force in the world, only for the lessons learned to be forgotten. Instead, air policy was guided by radical theories that predicted air power alone would decide future wars. Baughen traces some of the problems back to the very earliest days of French aviation. He describes the mistakes and bad luck that dogged the French efforts to modernise their air force in the twenties and thirties. He examines how decisions made just months before the German attack further weakened the air force. Yet defeat was not inevitable. If better use had been made of the planes that were available, the result might have been different.

The Rise and Fall of the French Air Force

On 10 May 1940, the French possessed one of the largest air forces in the world. On paper, it was nearly as strong as the RAF. Six weeks later, France had been

The Rise and Fall of the French Air Force

Why did the French lose in 1940? Were their aircraft inferior? Were there stockpiles of unused planes? Was defeat inevitable? Greg Baughen separates the facts f

The Rise and Fall of the German Air Force

Written by the men and women who conducted the intelligence campaign against the Germans, it recounts in full the principal campaigns, and traces problems encou

From Kites to Cold War

From Kites to Cold War tells the story of the evolution of manned airborne reconnaissance. Long a desire of military commanders, the ability to see the terrain

Rearming the RAF for the Second World War

When the RAF rearmed to meet the growing threat from Nazi Germany's remorseless expansion in the late 1930s, it faced immense challenges. It had to manage a hug

The Early Development of the Aviation Industry

The Early Development of the Aviation Industry: Entrepreneurs of the Sky provides an introduction to the world of the early aviation industry and the business e

France and Italy account for fully one third of all Allied bombs dropped on Europe between 1940 and 1945. Italy received some 370,000 tons of bombs, nearly five

The Rise and Fall of the Third Reich

Chronicles the Nazi's rise to power, conquest of Europe, and dramatic defeat at the hands of the Allies.