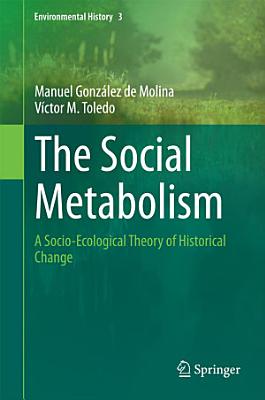 Over this last decade, the concept of Social Metabolism has gained prestige as a theoretical instrument for the required analysis, to such an extent that there are now dozens of researchers, hundreds of articles and several books that have adopted and use this concept. However, there is a great deal of variety in terms of definitions and interpretations, as well as different methodologies around this concept, which prevents the consolidation of a unified field of new knowledge. The fundamental aim of the book is to conduct a review of the past and present usage of the concept of social metabolism, its origins and history, as well as the main currents or schools that exist around this concept. At the same time, the reviews and discussions included are used by the authors as starting points to draw conclusions and propose a theory of socio-ecological transformations. The theoretical and methodological innovations of this book include a distinction of two types of metabolic processes: tangible and intangible; the analysis of the social metabolism at different scales (in space and time) and a theory of socio-ecological change overcoming the merely “systemic” or “cybernetic” nature of conventional approaches, giving special protagonism to collective action.

Over this last decade, the concept of Social Metabolism has gained prestige as a theoretical instrument for the required analysis, to such an extent that there

The Social Metabolism of Spanish Agriculture, 1900–2008

This open access book provides a panoramic view of the evolution of Spanish agriculture from 1900 to the present, offering a more diverse picture to the complex

Over this last decade, the concept of Social Metabolism has gained prestige as a theoretical instrument for the required analysis, to such an extent that there

'Unlike so many books that analyze material and energy flows in society and the developments therein, this is one of the few that link such information to devel

The Tragedy of the Commodity

How to Read Marx's Capital

An accessible companion to Karl Marx's essential Capital With the recent revival of Karl Marx's theory, a general interest in reading Capital has also increased

The Metabolism of Islands

This book makes the case for why we should care about islands and their sustainability. Islands are hotspots of biocultural diversity and home to 600 million pe

Climate change is causing traditional political and legal concepts to be revisited. The emergence of a global polity through physical, economic and social inter

Capitalism in the Anthropocene

Over the last 11,700 years, during which human civilization developed, the earth has existed within what geologists refer to as the Holocene Epoch. Now science

Environmental Justice: Key Issues is the first textbook to offer a comprehensive and accessible overview of environmental justice, one of the most dynamic field