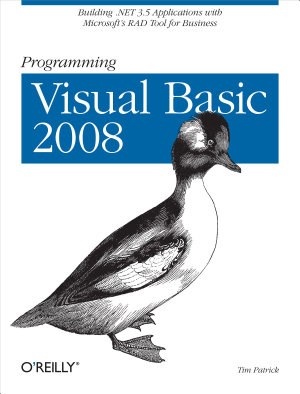 Ever since Visual Basic was merged into .NET, it's become the core language for creating business applications with Windows. The latest version, VB 2008, is even more useful -- and provides even more incentive for migrating from VB 6. All it lacks is a good book on how to harness its power. Programming Visual Basic 2008 fills the void. Written in a lively and engaging style by a developer who's grown up with Visual Basic, including both VB 6 and VB .NET, this hands-on guide addresses the core topics of the new VB, from basic to complex, with plenty of code examples. Programming Visual Basic 2008 also examines .NET programming from the application level with a chapter-by-chapter plan for developing, documenting, and deploying a full data-driven application. You learn, step-by-step, how to build and deploy a library management system, complete with patron, inventory, and barcode support. The book's broad range of topics include: VB language and its syntax An overview of the .NET Framework Object-oriented development in VB and .NET Generic objects, collections, and nullable types Design and management of software projects Integrating desktop features with Windows Forms Database design with SQL Server 2008 Database interface design with ADO.NET The new LINQ feature, and how to use it within VB and .NET Embedding XML within application source code Encryption and authentication in .NET Interacting with data stored in files and directories Web development using ASP.NET Deploying an application to a user's workstation And much more Programming Visual Basic 2008 is ideal for VB 6 programmers who are ready to move to .NET, as well as VB.NET programmers who wish to improve their project-focused software development skills. Programming novices and developers coming from other languages will find the book valuable because of its language instruction and project design knowledge. Once you finish the book, you will have a firm grasp of VB 2008's core concepts and language elements, and understand how to build VB projects as they were intended -- as complete, cohesive solutions.